When I turned six years old, I had already seen more than a dozen martial arts movies. From Bruce Lee and Jacky Chan, to Jean-Claude Van Damme and Michael Dudikoff, I knew them all.

One thing that had always fascinated me, was the relationships the heroes in those movies had with their masters. They were more than just teachers. They were mentors. Inspirational, guiding role models who would not just teach the ways, but more importantly the whys.

It wasn’t until I was ten years old, and after three years of Taekwondo training, that I randomly got sucked into a documentary about the Shaolin monastery one evening, as my mother and I were watching TV. I don’t recall the name of the film, but I was inspired and hooked. I learned that most students in Shaolin would start training at the age of six, some were only four or five. I was ten, which made me feel old. “I should have been there years ago”, I thought to myself. If I wanted to keep up, I had to go now. So I made a plan. All I needed to do was let my parents know and off I went, right? Well, not exactly. I had a reputation for coming up with some crazy ideas, so it took some time for anyone to believe that I actually meant business. In fact, it took me months of determination and not letting go of my crazy idea, before my parents finally realised that something was different. This time, I was serious and would not give up. It was more than yet another crazy idea. It was a dream. 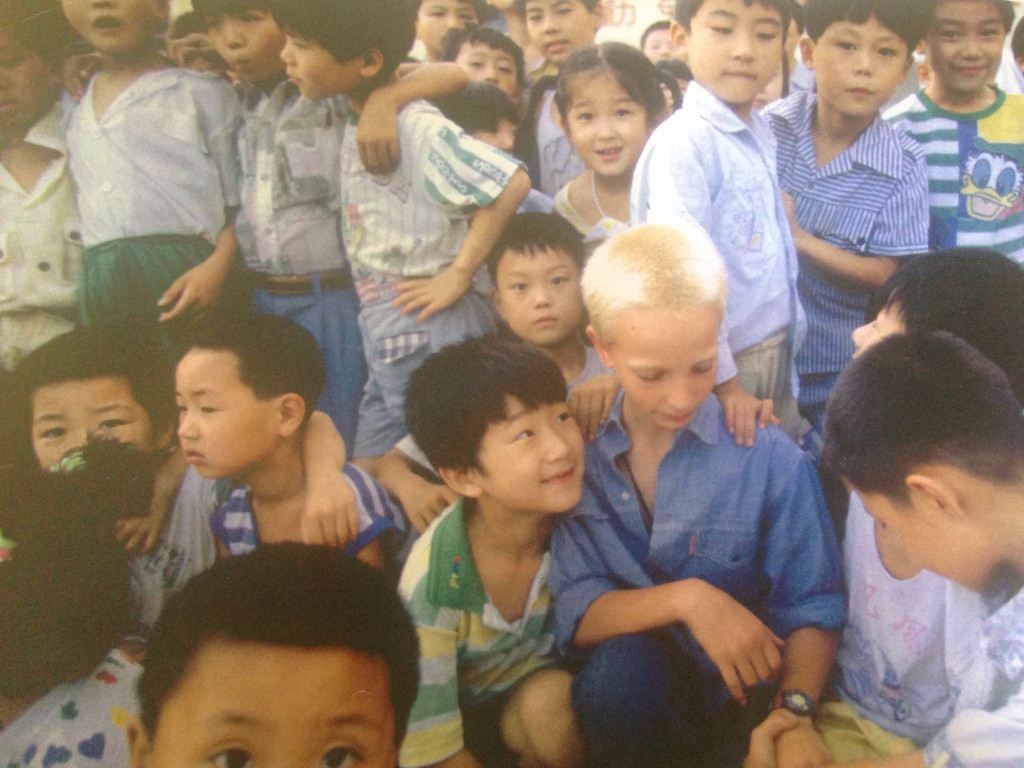 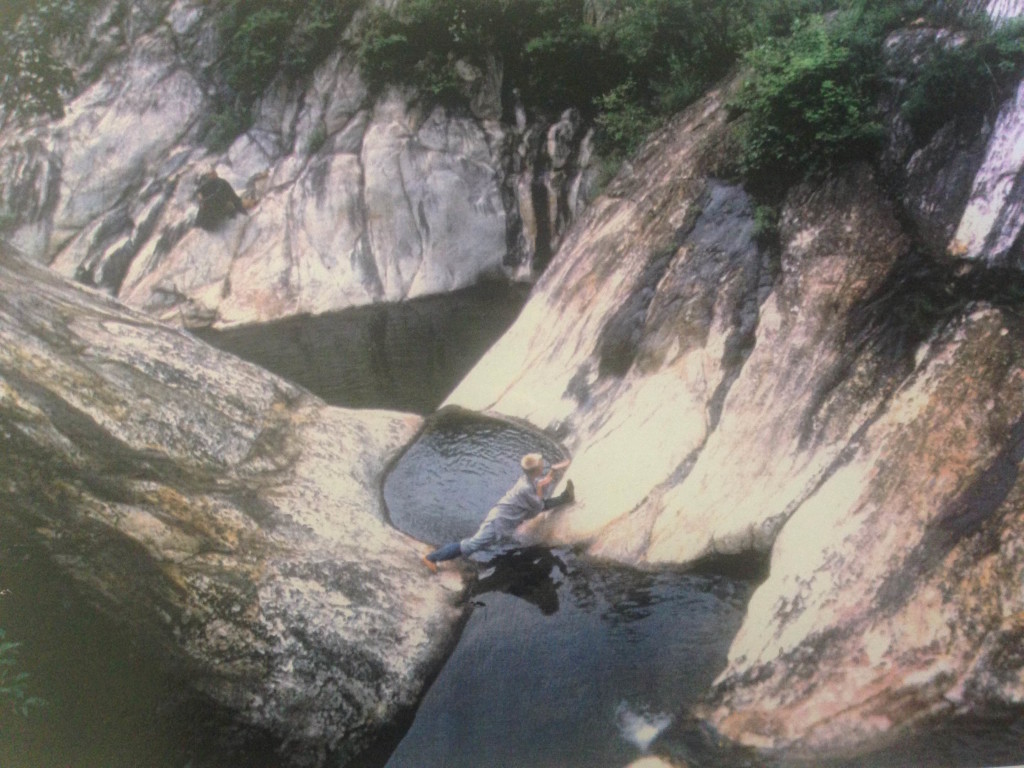 Once I had planted the seed of even just the possibility in my mum’s head, she started asking question after question: “What about school? What if something happens to you? What if you get sick? What if you want to come home after a few weeks?” – The list went on and on. Luckily, I somehow always had a good answer ready. And once it was clear that not going wasn’t an option, we were left with the question of how to make it happen. My once crazy idea had finally been accepted. My dream had become a possibility…

However, in 1994 this wasn’t a trip you’d simply book on Expedia.com. We didn’t have an internet connection back then, but somehow my mom managed to find the phone number of the Shaolin temple. Yes, the Shaolin Temple actually had a phone number! There was one phone for the entire monastery. But even after repeated attempts, my mum realised that it was simply impossible to communicate my crazy idea over the phone with the few words of Chinese my mother knew at the time. Nobody spoke English either. Nobody understood what we were even trying to ask. We needed a change of plans. If the telephone didn’t work, there was only one way to get our point across. We actually had to go to see the monks in person. So, my parents decided to take my little sister and me on a holiday to China, to stop by the legendary Shaolin temple and find out if I would be allowed to stay for a year. It was a huge challenge. The first time we visited, we were welcomed by the friendly monks with big smiles and green tea, but my wish was turned down with a friendly smile. Clearly, it was over. The end of the road. Here we were, having travelled all the way from the other side of the world, and all we got was ‘no’. I was heart-broken and felt guilty to have put my mum through all this effort, just to be turned down.

I thought “we are going back home. Back to life as usual”. “It’s not over yet!”, said my mum, full of hope and with determination written all over her face to make my dream reality. For nearly a week, we returned to the monks, day after day after day. Each time we visited, I noticed a slight change in the air. We were slowly building a relationship. It was absolutely surreal. Each time we would enjoy a cup of green tea together, laugh together – all with almost no Chinese language skills – and each day I felt a little more accepted into the circle. ‘No’ became ‘maybe’, and finally turned to ‘YES’. It suddenly hit me. My dream was no longer just a dream. It was real! I was excited and scared at the same time. I realised that I had reached the point of no return.

I started my training the very next day, and boy, my three years of Taekwondo were nothing compared to my first week of Shaolin Kung Fu. After a few more days of settling in and getting used to the environment, it was time for my parents to leave and go back home. Here I was, by myself, in a foreign country, at the age of ten. I stayed for the entire year and it was an unforgettable experience. Sure, I had many ups and downs, but every day I learned something new. About Kung Fu, Chinese culture, about people, and mostly, about life.

Most people called my parents crazy for leaving me there alone. I, however, couldn’t be more grateful to them. It’s only now, twenty years later, and as a parent myself, that I truly understand the amount of courage and unconditional love it would have taken to trust and let go of your child in such a big way. I feel humbled, proud and forever grateful for having had this opportunity of a lifetime, which has forever changed my life and still, to this day, influences my decision-making.

I would even argue that this single year of living by myself, in a foreign country, immersed in a totally different culture, has given me more than my twelve years of traditional education. I’d like to share five big lessons that I have taken away from my year in Shaolin.

Five life lessons that I learned living with the Shaolin

“The mind is everything. What you think, you become.” From an idea sparked by a film, I made a conscious decision to make this my new reality. But it was only through persistence that I was able to reach my goal. Your thinking determines your actions and your actions determine your outcome. The right mindset can move you towards everything you desire. The wrong mindset, however, will deprive you from your dreams and result in dispair and frustration. By change your thinking ,you will change your life.

2. Who looks inside, awakens.

I followed a strong desire inside me. Nobody asked me to go. It was a decision I made with my heart, not my mind. If I would have been rational, it would have never happened. Don’t be rational but trust your heart to make decisions.

3. No one can walk your path for you.

If you wait for others, so will your opportunities. You have to be the initiator of your own dreams. When you start to follow your heart, doors will open and the right people will show up to support you. True love will always find a way. Stay true to yourself and choose your own path.

4. Don’t believe everything you are told to believe.

Before my journey, not many people believed me when I told them about my plan. Your reality is not my reality. Don’t be discouraged by anyone who tells you that something is not possible. It is simply not part of their reality. You create your own reality. Choose to belief whatever brings you closer to your goals. Discard any beliefs that will lead you away from your goals.

5. Look for peace within yourself & let go of attachment

As a child I had a lot of “stuff”. Toys, games, all sorts of things that we are taught to believe will make you happy. During my time in Shaolin I had a few clothes, a bed, and daily kung fu training. I soon realised that “stuff’ wasn’t contributing to me being happy. It would only distract you from facing the truth. Distract you from looking deep inside you to find out who you really are. What really matters to you. Do not look for peace around you for it originates from within.

Watch the documentary about David’s year in Shaolin: